I hope this Nope movie review can help you decide what to see at your local theater this weekend. If a trip to a sci-fi/horror monster movie is in your wheelhouse, you are definitely in luck.

As a person with a love/hate relationship with “horror” movies, I went into Nope hoping it would be more thriller or monster-movie-esque than straight up terror-inducing. I thoroughly and completely adore movies like Jaws, Jurassic Park, Independence Day, and even Twister. Not entirely horror movies, but movies with edge, a little extra tension to keep things interesting. Okay, and maybe a scare or two. The first trailer for Nope definitely gave me those vibes. However, there was just enough of that special Jordan Peele flair to make me wonder if I was about to cross my personal horror threshold in preparation for this Nope movie review.

I’m perpetually intrigued by Jordan Peele’s style of filmmaking, even without having seen Us (only because the trailers and advertisements totally freaked me out, crossing over into “I’m gonna need confirmation from a trusted source that I can handle this movie” territory). The trailer for Get Out had me believing it was straight up horror, and, while the subject matter was indeed truly terrifying, it was not the filmmaking that made it so, in turn making it incredibly watchable in its scariness. And now Nope has entered the scene. At first glance it reads more like a sci-fi thriller than a horror movie, so I was more on board than ever before. And I’m so glad I didn’t chicken out.

Nope is a nuanced, incredibly realistic depiction of two siblings going to battle against an enemy they know next to nothing about. If it had been a bear, a cougar, a zombie horse, or anything else, this movie could have been formulaic, but a couple of humans and their friends doing their best to defend their homestead against an enemy whose temperament and abilities are completely unfamiliar, that I can get behind. This was a totally new way to look at an alien movie. We’ve all seen Independence Day, and even Mars Attacks or War of the Worlds, and experienced the massive scale invasion kind of UFO story. I was drawn in by the idea that Nope was about this family, in this canyon, with this one unknown enemy lurking out of sight. It’s a whole new take in this sci-fi/horror genre mashup. 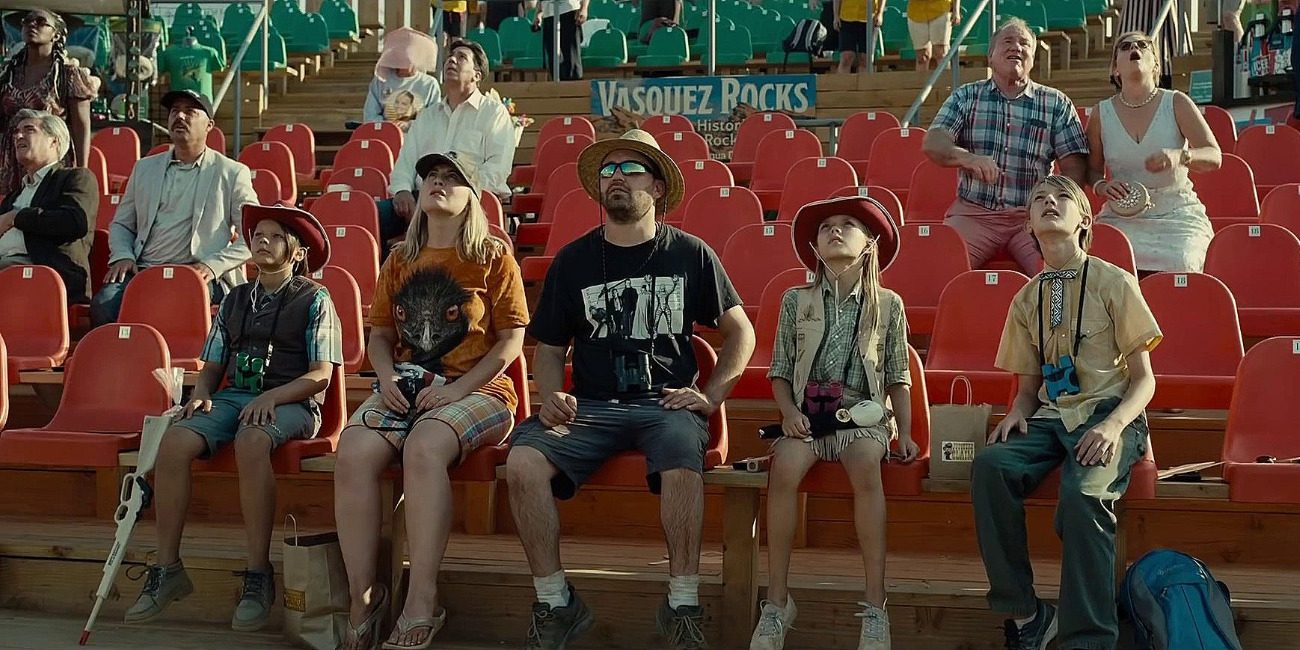 And that’s not even touching on the thematic elements involved. If you’ve seen Nope, you’ll know that there is a very prevalent chimpanzee, whose story comes into play at very interesting times. It’s hard not to see the parallel of the chimp and the extraterrestrial, but the human response is more important here. This is where I have to take a second out of this Nope movie review to talk about Steven Yeun’s character.

While not one of the central characters, his is pivotal to understanding the ideas of exploitation and spectacle clearly being examined here. Ricky “Jupe” Park had a traumatic event occur as a young actor, and it left its mark on his psyche. But rather than shying away from the limelight, as some might expect, he takes on the pressure of creating a spectacle for guests at his carnival to be amazed by. And, clearly, he’s tried other acts and things in the past, but once he discovered what was lurking at the Haywood estate, he knew he had his most spectacular exhibition ever. 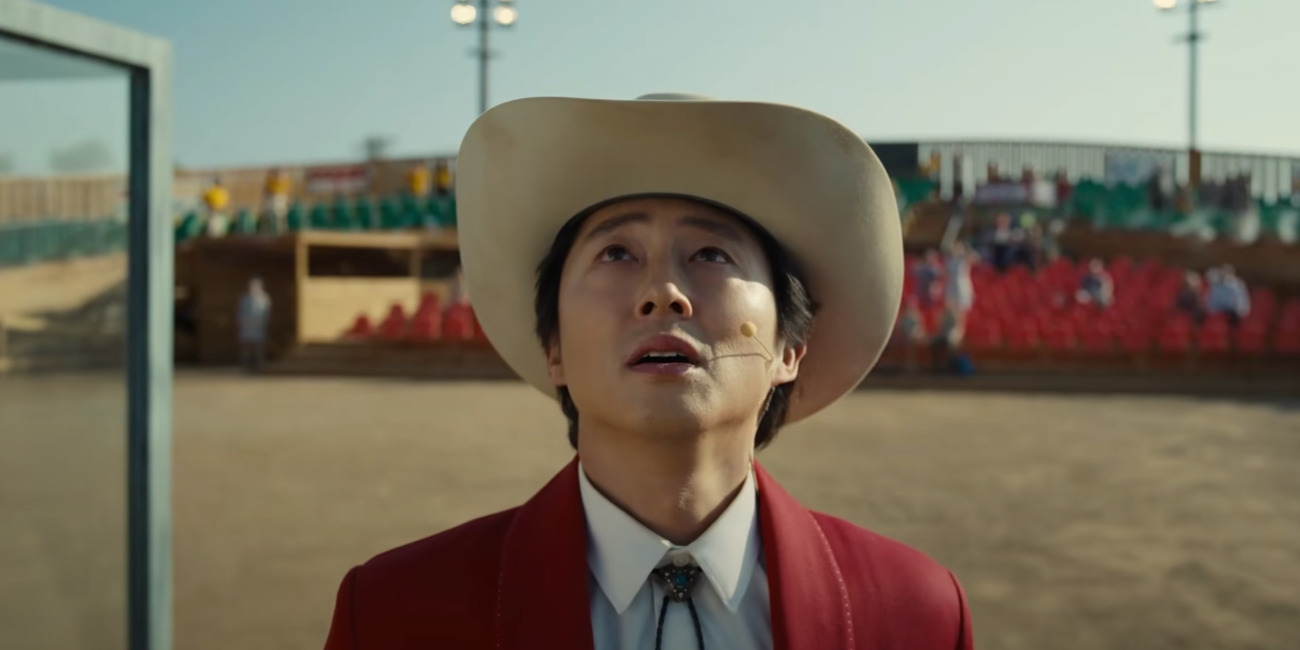 I won’t spoil what happens next, but looking at the experiment conducted by his character in Nope, we see that humans have a long history of exploiting creatures we consider to be lesser than. Animals and beings that we believe we can control are fodder for performances to further our own personal agendas.

I am also fond of the secondary idea presented in Nope, that one person’s spectacle is another’s downfall. While Ricky was concocting the perfect act for his center ring, the Haywoods were defending their family’s legacy from annihilation. I couldn’t help but recognize the power in the idea that while one person only sees their actions and consequences as affecting them, there is a whole separate set of consequences landing on people who had no control, interest, or part in the actual villainy. Far too often in the world, people forget to take into consideration what harm their actions could do to people they will never know. While Ricky was well aware of the Haywood farm, he didn’t consider for a second that his show could affect the lives of anyone else.

This Nope movie review could not come to a close without talking about the film’s stars. Both Keke Palmer and Daniel Kaluuya are incredible in their roles. From the beginning of the film to the end, the sibling bond is more than apparent between these two. The bickering, the love, and the protective instincts are all textbook brother/sister qualities, but Palmer and Kaluuya find a way to make the Haywood siblings’ bond absolutely unique. Both are incredibly skilled and powerful actors, so seeing them together on screen made for a fantastic fictional journey into family dynamics with an alien in your backyard. 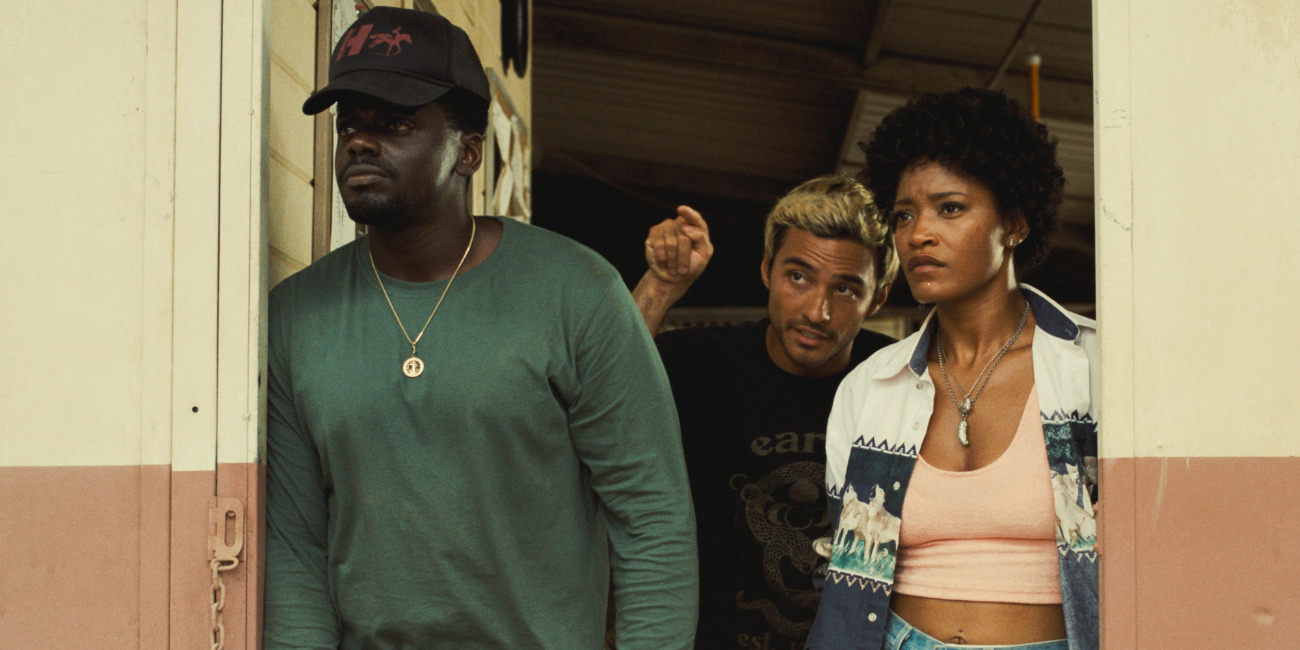 And while I wouldn’t call them the film’s stars, Nope just would not have been the entertaining horror romp that it was without Brandon Perea and Michael Wincott. The part they play in the closing act (and Perea even before that) helps this Peele film to set itself apart from any alien movie I’ve seen before.

So, if you are in the market for an original, interesting film that has so much more to discuss than whether aliens are good or bad, Nope is definitely the movie you want to see this weekend. And I hope this Nope movie review more than warrants a trip to the theater. Seeing this on the big screen is worth every penny, allowing the setting and its tormentor’s scale to fully set the terms for how this alien/human interaction will go.

Nope is in theaters now. Check your local listings for showtimes.

What did you think of our ‘Nope’ movie review?