Elizabeth Olsen’s portrayal of Wanda Maximoff in Doctor Strange in the Multiverse of Madeness gives me hope for the future of the MCU and all Hollywood blockbusters.

Wanda first caught my eye in Age of Ultron. Her powers were unlike any Avengers’ before her, and she sported a very unique style. What I didn’t know then was how much Olsen’s performance would come to mean to me as I explored more of what Scarlet Witch had to offer to the MCU.

Wanda was a character many didn’t initially think twice about. She had a side role in her debut in Age of Ultron, often being overshadowed by the more seasoned Avengers she played ball with. However, what I found interesting was her deceptively complex twist from villain to hero in the span of those 141 minutes.

There was something to Olsen. A spark of something beyond ingenue or prodigy, the young actress showed a depth beyond what most MCU actors had the ability to (given limited/shared screentime, physical exhaustion, or the general burned-out nature of filming so many movies back to back).

Olsen was a fresh face to the superhero world. I had previously watched her in Martha Marcy May Marlene and Silent House, so I knew a bit of what I was signing up for. Scarlet Witch was devious, but even in her bad streak, Olsen showed a vulnerability and love amidst her sneering hatred toward Tony Stark. 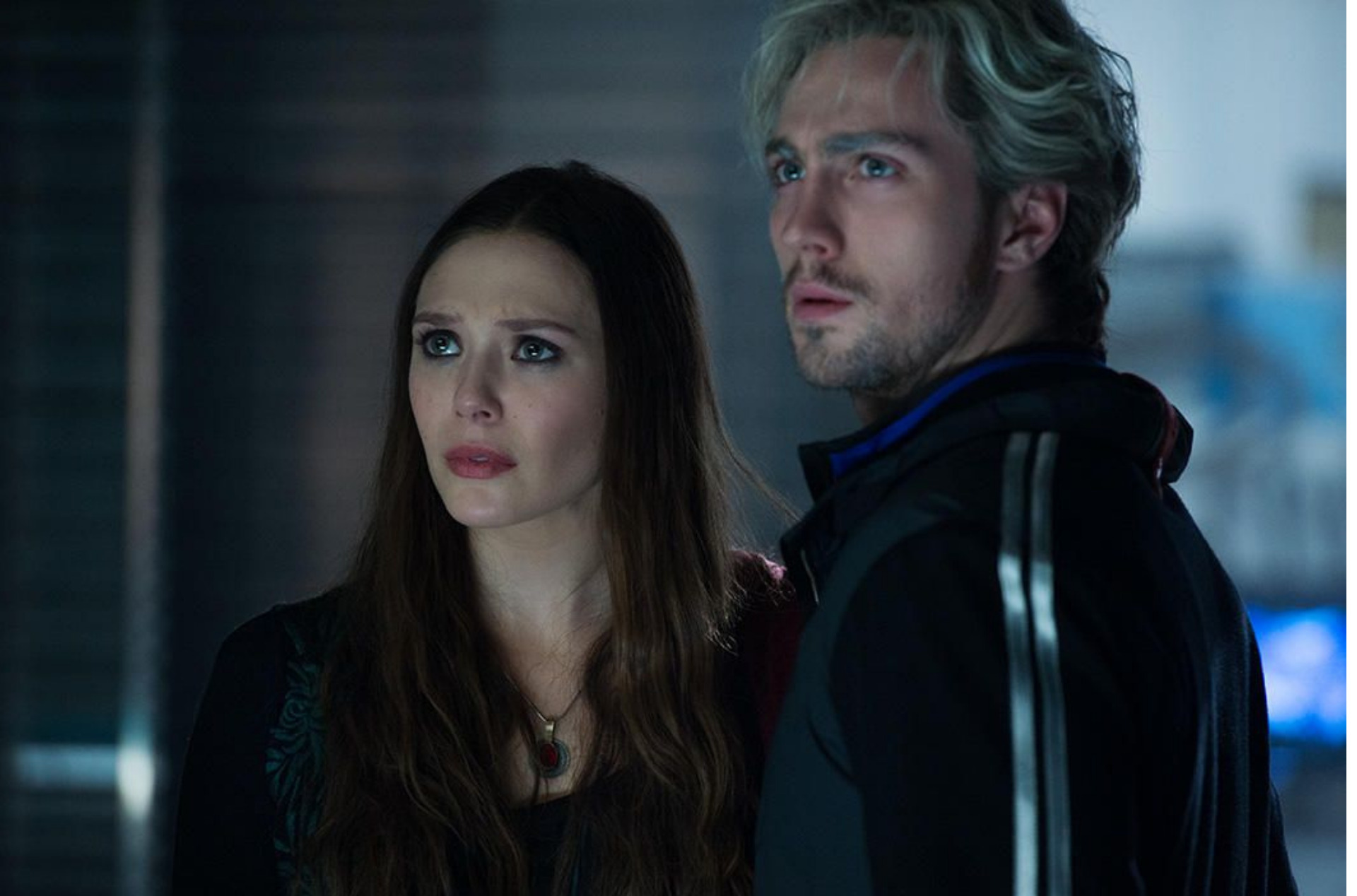 The ending sequence of Ultron solidified my intrigue in Wanda. After suffering the loss of half her soul when Pietro died, Wanda’s rage and grief struck a deep chord with me. Sure, she was instrumental in defeating so many Ultron bots all at once, but the kill that really mattered was the one where she ripped out the head honcho Ultron’s heart.

Wanda was broken, but Olsen found a bit of hope when she leaned into the spark between Wanda and The Vision. She gave him a specific look when he was created, which was carried through to when he convinced Wanda to leave the crashing Sokovia. This was a smart beat, as it showed our Scarlet Witch had much more growth to achieve, despite the suffering she would come to face in her heart-shattering losses.

Wanda stepped up to the plate in Civil War, showcasing a greater mastery over her powers of persuasion and energy blasts in the opening sequence. Unfortunately, she was blamed for the grenade explosion, despite the fact that she was doing her best to contain the explosion from spreading outside of her energy bubble.

Scarlet Witch was seen as an enemy, and served as the crux of the aftermath of Ultron. The world treated Wanda as an outcast and a dangerous monster, and hell if she needed Vision’s well-intended protection. The subtly between Wanda and Vis as they both discovered their feelings for one another was coupled wonderfully with the beat of them fighting on different sides of the Avengers’ Civil War.

I believed in Wanda. I wasn’t just rooting for her, but I was feeling with her. Why did many of the other Avengers treat her like an animal in a cage? Steve knew that Tony keeping her in the tower was both immoral and controversial. Thank God Clint took her side and helped her escape the tower. She was no longer trapped, and was free to make whatever decisions she cared to.

The MCU seemed to tire of teetering Wanda on the line of villainy and heroism, as she soon went on to become one of the greatest allies in the battle against Thanos. Come Infinity War, Wanda spent fleeting moments with Vision, trying to tie her life back together amidst the shreds of horror in her recent history.

Wanda really hit her stride in Infinity War. As she fended off Vis’ attackers, we got a full taste of what the Scarlet Witch was capable of. And still, during the CGI-laden battle, Olsen took moments to give a special flick of the wrist and grimace of frustration to really sell the emotional toll the ongoing battle was taking on her.

Fast forward to the end of Infinity, wherein Wanda is forced to kill Vis. This was the most emotional moment in all of the MCU for me, and may remain so forevermore. Wanda screamed in pain as her soul was once again torn in half. It shouldn’t have been her, but it was.

Broken and incomplete, Wanda looked Thanos in the eye, shaking my emotional center to the core. Beyond hatred and fear, the numbness following her shocking sacrifice left her vulnerable to Thanos’ final Time Stone gambit. While many other Avengers fell to dust, I felt most for Scarlet Witch.

Wanda was snapped back into existence, and without missing a beat, went right for The Head. Wanda had Thanos within an inch of defeat. Once again, Thanos cheated to best the Scarlet Witch, but if he hadn’t, she would have won all on her own.

“You took… everything from me!” snarled Wanda.

“I don’t even know who you are,” said Thanos.

That was it. Wanda had my heart. My full devotion. I would do anything for this suffering soul. She was my ride or die, and remained so all the way up to Doctor Strange 2.

What a treat it was to get a whole show dedicated in full to Wanda and Vis! I was convinced we’d seen the last of Vis, but her reincarnation of her partner set up for an amazing story of mystery and zany adventure.

Wanda peeked through the characters she was emulating, letting on that Scarlet Witch was stewing in a mix of grief, anger, and confusion during the whole ordeal. There wasn’t a single second of screentime where I found myself bored or disinterested. 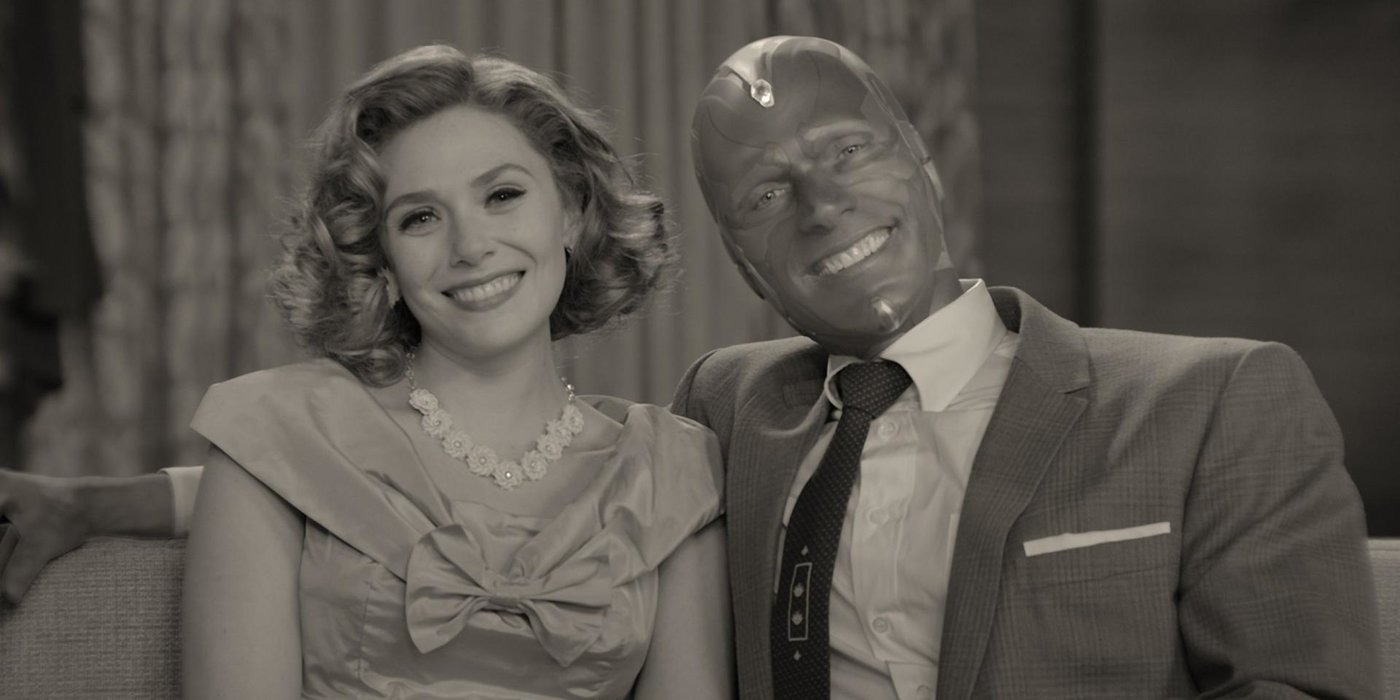 For a Wanda fanperson such as myself, seeing this glorious mix of theatricality and character growth was the stuff of dreams. I even went so far as to join a FaceBook group dedicated to hunting down the costume pieces used to dress Wanda in all of her iterations.

I sort of had the idea that Wanda was a theatrical queen, but this fully came into realization during the amazing transformations of hair, makeup, accents, costumes, and set. I knew there was a real-life creative team deciding all of those major decisions, but I liked to live in a world where the Scarlet Witch was the one doing all the heavy lifting.

This next section was tough to write about. Getting to see the events leading up to her joining the main MCU story in Ultron was heartbreaking. Wanda clung to the one thing that made her feel at home and safe again: sitcom TV shows through the decades. Suddenly, the different stylizations of Wanda’s theatrical world came down to Earth. Wanda was human, and a human still reeling from the horrific death of her parents.

Agatha made some pretty low blows during WandaVision. As controversial as it is to say, I don’t think it was necessarily all Agatha all along. Sure, she created fake Pietro and killed Sparky, but Wanda was the one creating the entirety of Westview’s fake world. 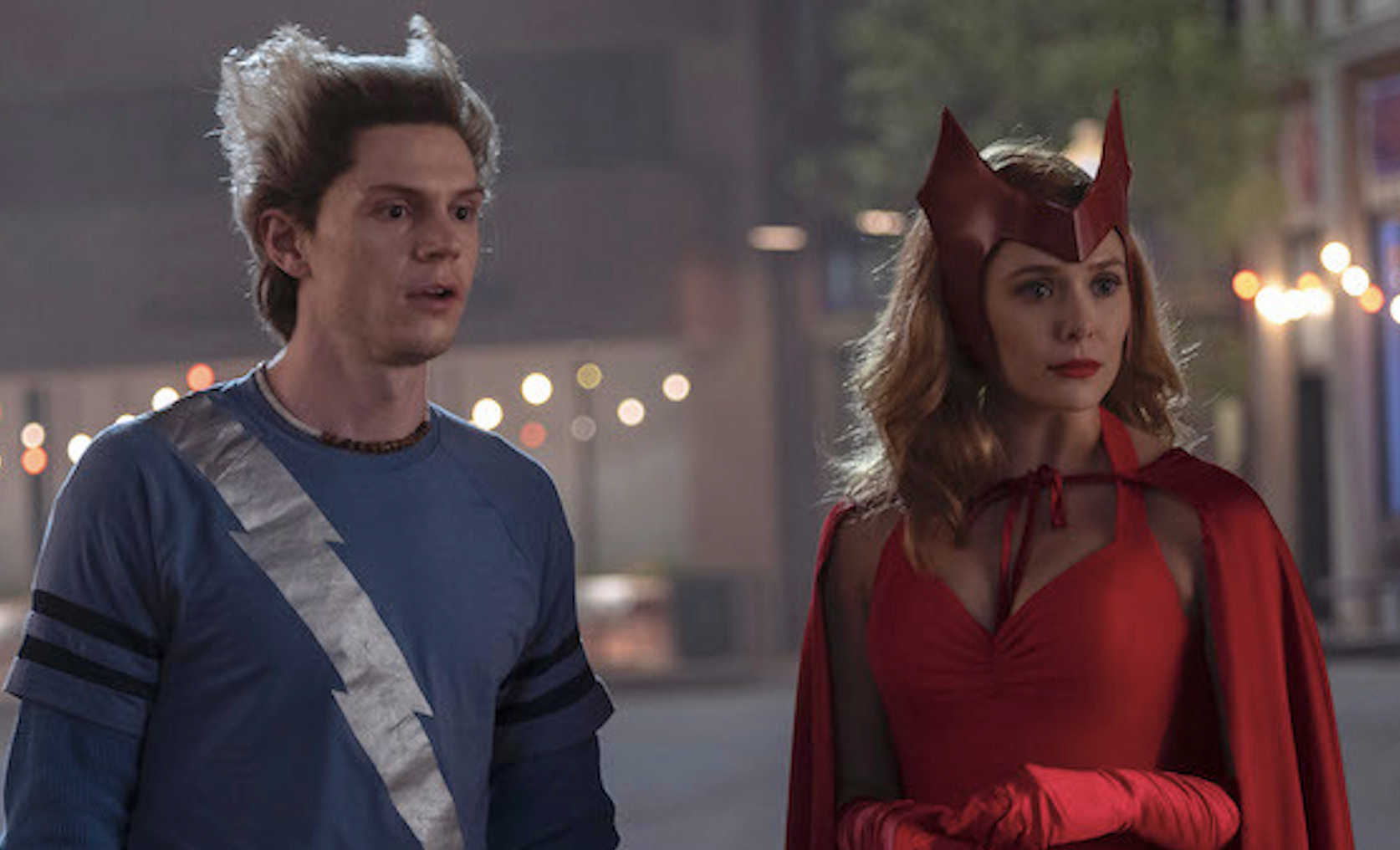 Agatha was an interesting character in the comics, as she eventually turned into a sort of ghostly consciousness tied to Wanda’s being. Kathryn Hanh gave me the impression Agatha could someday become close-ish with Wanda, which would be pretty offbeat.

In the finale, the Scarlet Witch came out to play. Even Agatha wasn’t as excited as I was. Olsen looked like an ethereal goddess in the latest iteration of Scarlet Witch costuming, donning her Wimple for the first time, fully completing The Look.

Still, Wanda knew it was time to say goodbye to her family, so she turned off her Scarlet Witch mode and became just Wanda. Wanda, a mom to Billy and Tommy, married to Vision, living in peaceful, idyllic suburbia. She deserved to have a quiet life long, long ago. Ripping away her dreams brought reality crashing down. She realized how much damage she’d caused the citizens of Westview.

Going into Multiverse of Madness, I’d done a pretty good job of not spoiling myself. I didn’t know for sure if Wanda was a/the villain of the movie, which was the best way to experience her Hex.

At the end of WandaVision, we already saw Wanda split herself between her regular consciousness and the Scarlet Witch. I feel like I should have known she was leaning toward series villain, as reading something called the Darkhold didn’t exactly feel very heroic-y. 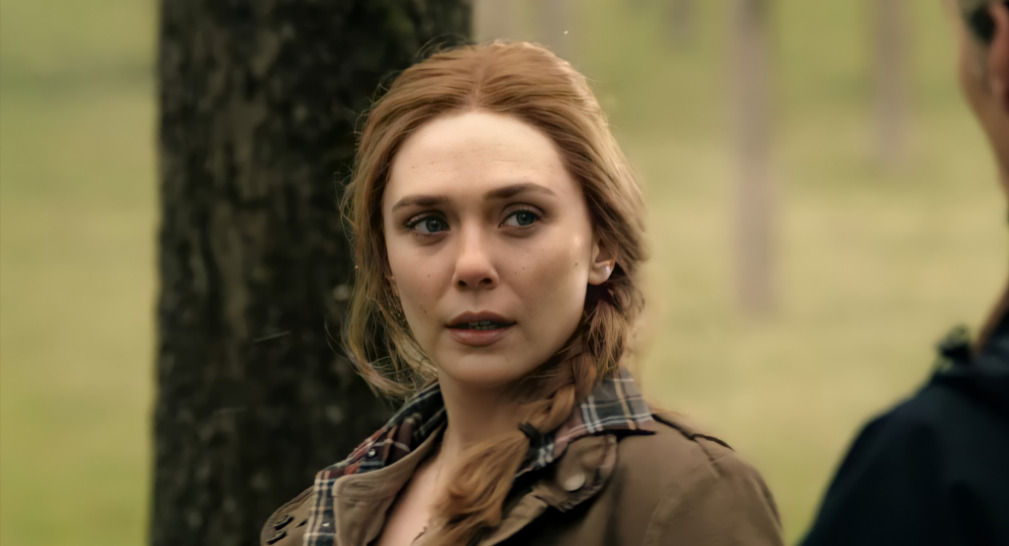 Seeing Wanda kill her first crowd of heroes in the battle of Kamar-Taj was shocking. I mean don’t get me wrong, I was still rooting for her. After all, she was being very reasonable. A certain callback to Ultron tickled me pink when Wanda whispered “run” into the mind of a particularly susceptible warrior.

All the while, Wanda would explain to Strange and co. how she simply wanted to see her children again. I should say, Scarlet Witch would explain, as the distinction between the human and the persona started to blur. As Wanda said herself, “It won’t be Wanda who comes for her. It will be the Scarlet Witch.”

Literally, even if Wanda’s dialogue didn’t contain the word “reasonable,” I would have described her journey of sunshine, happiness and rainbows as such. I know, I know, I’m a brainwashed Wanda stan, but after all the buildup, how could I not support everything our queen desired?

A controversial sequence followed wherein dreamwalker Wanda killed The Illuminati one by one—and in brutal fashion, mind you. I hate to say it (no, I don’t, I just don’t want to come off sociopathic), but I was rooting for and excited about every single string cheese and exploding head fatality Wanda dealt, save for Peggy. Peggy deserved better.

At least I knew I wasn’t alone! In my own little Wanda stanning fandom, it seemed as though most of us were on the same page. “What mouth?” is the iconic queerstan moment in all of superhero movies. Sassy and murderous, just like we like ’em. 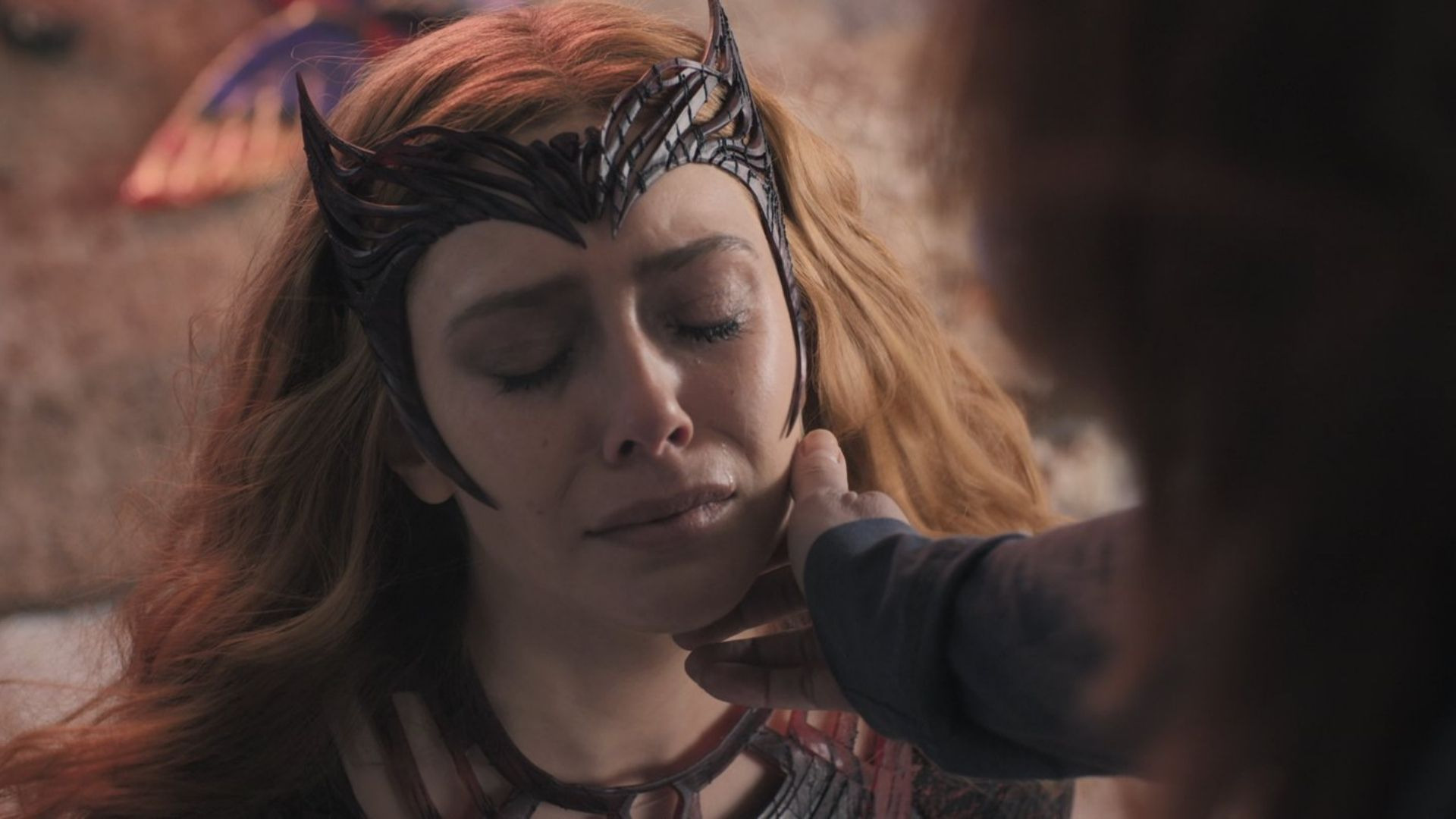 Not much more can be said about Olsen’s performance in DS2 other than, “Finally, y’all are paying close attention to her talent!” Olsen moved audiences. She was the movie’s villain, sure, but who among us can say we weren’t rooting for her to get her way, even just a teensy tiny bit?

Related: WandaVision: Let’s talk about Wanda’s grief (because no one else is)

Oddly enough, I didn’t feel sad when Wanda “died.” Maybe it was because I didn’t buy it. It made sense to close her Multiverse of Madness arc in a heroic act, but there’s still a lot of room to redeem Wanda in future potential X-Men MCU merger plots.

Let’s tie this up with a pretty lil’ bow: “Know that they’ll be loved.” There’s a Wanda out there raising Billy and Tommy, and our Wanda knows to leave her alone. The boys are all good, and even without Vis, they seem to be living a charmed, ice cream-filled fantastical life. Wherever you lead me next, Wanda, know I will follow you and Olsen to the end of time.