Tom is onto The Road Back’s attempt to hack Barclay in Tom Swift season 1, episode 3, and he just needs to stop them from getting 100% access to his memory. That might sound easy, but it’s proving to be anything but.

Tom has a lot on his plate in this episode, but he’s totally capable of nailing it all. Maybe. We shall see. If you need a quick refresher on what happened in Tom Swift season 1, episode 2, try our review and then come back here for all the details in episode 3.

If Congressman Eskol (and The Road Back) get access to Barclay’s memory, he will have access to not only all of Tom’s research and data regarding his inventions and the company, he and his minions will see the evidence that Barton Swift did not die in that explosion, but is, in fact, still alive. Once they have access, they’ll be able to collect the broken pieces of the capsule before Tom. They don’t want Barton Swift returning to Earth, so if they have to sabotage Tom’s rescue attempts, gaining unfettered access to Barclay is the best way. So, Tom must save his friend and AI confidant, Barclay, from the enemy’s clutches to keep everything under his control.

Add to those pressures that his mother wants him to host a very influential woman, Susannah Robb, and woo her with technology and extravagance. She is a valuable investor in the Swift family business, and Susannah wants to see Tom take the lead role in the business going forward. She believes that Barton is gone, and wants to see that Tom is taking his place as the head of the company. It’s a lot for anyone to endure.

Things kick off with the summit, chock full of business and investor-types. A party the congressman will not be able to turn down, especially for possible campaign donations. Which means Rowan will be there, too. And since Tom needs to clone Rowan’s phone to save Barclay, it’s essential that they get this done at the summit. Tom manages it, but not without a few bumps along the way.

While sometimes the technology in this show seems a little farfetched, Tom Swift season 1, episode 3 had some of the more down-to-earth sci-fi that feels completely possible. The nanocream that moisturizes and hides blemishes by perfectly matching your skin tone? There’s probably someone already working on something just like that. The translator he shows to some business-types? Definitely possible. Even the AR monocle. I mean, it syncing with the optic nerve is a little scary, but with the advancements modern technology has made, I believe it’s totally possible. The only bit I’m a little unsure of is that penlight, but that might just be because I definitely don’t have the scientific mind to even understand what was happening with that whole thing.

What I do know, is that Tom is going to have to learn to delegate if he wants to lead anyone and/or save his father. He takes on too much, especially when he can hand off a problem or two. He’d definitely the only one who can handle the science of some of this stuff, but, for instance, in this episode, Zenzi could DEFINITELY have been put in charge of cloning Rowan’s phone. She could have snuck up behind him during the same presentation. Tom just HAD to be the one to do it. That’s entirely because he has the hots for Rowan and didn’t want to let anyone else get close. But I digress.

I didn’t notice when Claire was able to get the pen light out of Tom’s hands in the episode, but she is not smart enough to alter the code to sabotage him and the champagne. Who do we think she got to do that in such a limited amount of time? Something worth thinking about.

Also worth noting: Eskol is equally as charming as he is a total slimeball. I think. He’s definitely being set up as the villain, but we haven’t gotten to see enough of him to truly know whether he’s the mastermind or the pawn. I’m definitely leaning toward mastermind, but we shall see. I’d like to get a better idea of who exactly is pulling all the strings on the other side of things. Maybe we’ll learn more about that in an upcoming episode.

One thing I’m sure of, if Tom doesn’t wise up and let his mom in on his father’s survival, he’s gonna lose her unconditional support. At this point, he doesn’t really have a great reason to keep her in the dark. Sure, she needs to keep the act that Barton is gone for the public, especially to help keep the congressman in the dark, but there’s no reason she can’t know he survived for her own well being. She wouldn’t be putting Tom in positions to fail the company if she knew what he was working on and what he had to accomplish at these events. She wouldn’t be foolishly trusting Claire as much as she is, either.

At the end of Tom Swift season 1, episode 3, we see Rowan tell Eskol that he found another source for their information while at the summit. We didn’t see him make any connections, but since Claire definitely needed a helping hand to sabotage the champagne, could Rowan have exchanged his services for information about Tom? Is she the new source they’re going to use going forward?

The B-plot of this episode, leaving all the Swift Enterprises stuff aside, puts Lino in an odd way. We see him fencing at the episode’s outset, and he is quite the phenom. He manages to win a match without his opponent landing a single point. Then, later on, Tom leaves him in control of physically producing the pen light. When it is done, Tom praises Lino’s fine motor skills. Later, Lino mentions that he can sense electrical signals, letting him predict behaviors and fine tune his reaction timing. This is demonstrated vividly when he catches a falling coffee cup from a waiter’s tray. This is, supposedly, something his mother (Lorraine’s sister) went through before she left him. Does Lino have some supernatural ability, or is this some reaction to all the scientific experiments going on around him? And how is it linked to his mother, in that case? 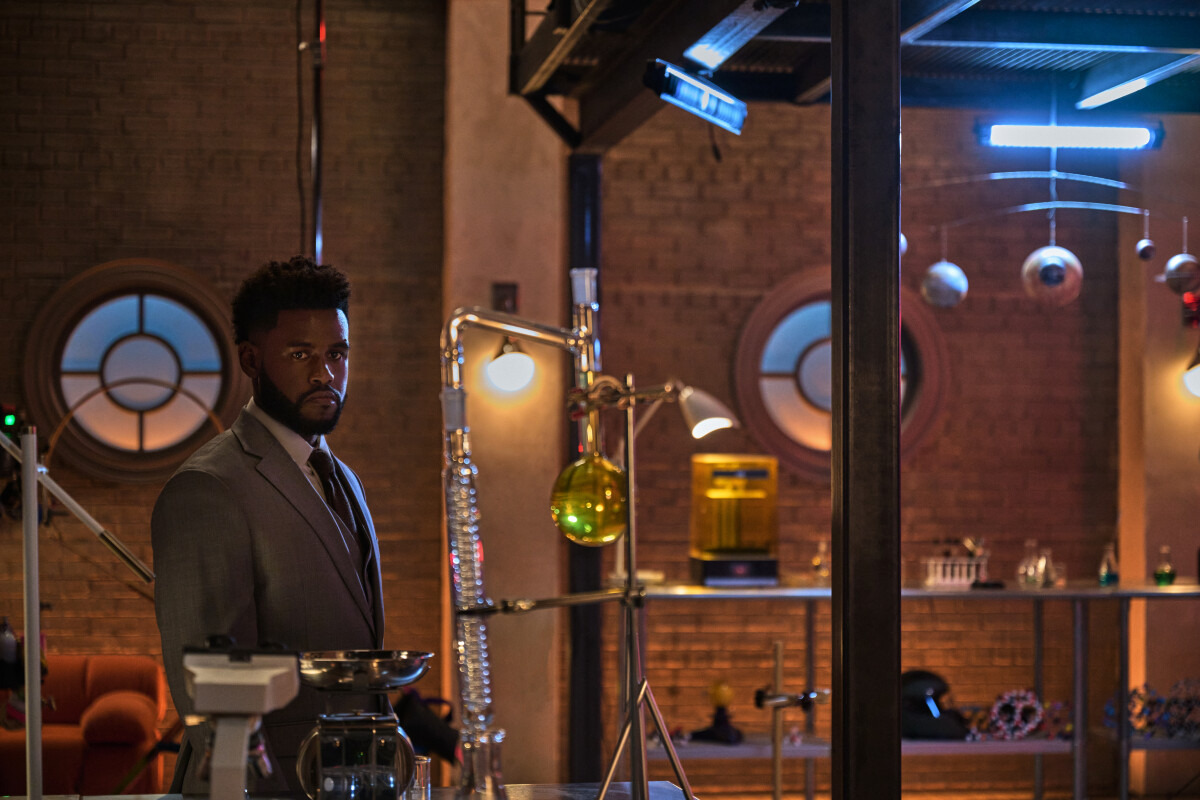 Ultimately, this episode left me with more questions than answers, but I’m looking forward to seeing what more we will learn before this season wraps up… whenever that is.