Filming has been moving along at a steady pace since June 2, 2022, and all seems to be going well at Camp Half-Blood. Searching for Percy Jackson and the Olympians on Disney+ will inform you that the series is currently set to premiere some time in 2024. Though we have a long wait ahead of us, there’s plenty to look forward to in the meantime to tide us all over until the big event.

When Disney+ first greenlit the show, I decided to get my hopes up. How could I not? This adaptation had been a long time coming, and unlike the ill-fated film adaptations, author Rick Riordan would be heavily involved in the process as an executive producer.

There are a lot of details Disney will want to make sure they get right, but one of the biggest will be the Percy Jackson and the Olympians cast. Unlike the films, the show will cast age-appropriate actors, and if we’re lucky enough to get all five seasons, we’ll be able to see these kids grow alongside their beloved characters.

There was an open casting call for the trio, with the team watching tens of thousands of video auditions until they found the right actors to fill those fan-favorite shoes. As the titular character, Percy was always going to be the linchpin to this group, but all three would need excellent chemistry to bring the story alive.

With the majority of the main cast announced, we’re still waiting on the identities of a few other major characters (like, oh, Zeus and Poseidon, for instance). Interestingly, we’ve also learned that a few other characters, like Hermes and Hephaestus, will have larger roles in the show than they did in Percy Jackson and the Lightning Thief, which the series will cover in its entirety throughout season 1 across eight episodes.

This article’s intent is to keep track of all the actors in the show, including what other projects they’ve worked on and their official social media accounts. As soon as a new cast member is revealed, we’ll update the appropriate section, so bookmark this page to make sure you’ve got the most up-to-date information! (Note: We will only be adding officially announced cast members to this page.)

Walker Scobell as Young Adam in The Adam Project

Character bio (via open casting call): [PERCY JACKSON] Playing 12, male. A smart, compassionate kid, with a sharp sense of humor. He’s always seen himself as an outsider, in no small part because of how the world sees his ADHD and dyslexia. He’s no wallflower though. He’s impulsive and rambunctious, and is quick to anger when things seem unfair to him. Sarcasm is just another service he offers, but beneath his cynicism is an affectionate son and loyal friend who just wants to do right by those he cares about. If only he could find a place where he fits in.

Listen to Prophecy Radio: A Percy Jackson Podcast episode #28 to hear the hosts react to the Walker Scobell casting.

Character bio (via open casting call): [ANNABETH CHASE] Playing 12, female. A true daughter of Athena, she’s a brilliant strategist with an active and curious mind. She’s often frustrated by being so many steps ahead of everyone else, and after having spent the last five years at Camp Half-Blood she longs to test her mettle in the human world, of which she remembers very little. She trains Percy to survive the mythological world and in turn he helps her connect with her humanity.

Aryan Simhadri as Rohan in Spin

Filmography: Cheaper By the Dozen, Spin, Will & Grace, Trevor: The Musical

Character bio (via open casting call): [GROVER UNDERWOOD] Playing 12 (but an old soul), male. Grover is a satyr (half boy, half goat) and an empath. He cares deeply about others and will always choose what is best for them, sometimes at his own expense. Though cautious by nature, he’ll always throw himself into a fight to protect his friends. Grover’s earnestness and intensity of enthusiasm lead to both touching and comedic moments.

Filmography: Diary of a Future President

Character bio: Luke is one of the older campers at Camp Half-Blood who takes Percy under his wing. As a proficient swordsmith and head counselor of the Hermes Cabin, he guide Percy as he settles into his new demigod life.

Dior Goodjohn as Robyn Rook on Head of the Class

Filmography: Glee, Raven’s Home, Head of the Class, Are You Afraid of the Dark?

Character bio: Clarisse is the daughter of Ares, and as such, she and Percy don’t get off on the right foot when he first arrives. She’s known to be a fierce warrior in battle, and a bit of a bully around Camp Half-Blood.

Virginia Kull as Linda on Nos4a2

Character bio: Sally Jackson is pretty much the best mom you could ever hope to have. Her love of her son, Percy, knows no bounds, and she’ll do whatever it takes to keep him safe. Though she is a mortal, she’s quite familiar with the world of gods and legends.

Timm Sharp as William from On the Verge

Filmography: Fun with Dick and Jane, One Day at a Time, On the Verge

Character bio: If Sally Jackson is the best mom you could ever hope for, then Smelly Gabe is the step-father of your nightmares. He’s mean and smelly and doesn’t treat his wife with respect. Needless to say, Percy hates him.

Filmography: Better Now, And Yet They Speak

Character bio: Clarisse isn’t the only bully Percy has ever encountered, though luckily for him, Nancy is a mere mortal. We first see Nancy while Percy is on a field trip for Yancy Academy. She dumps her half-eaten sandwich in Grover’s lap, and Percy can’t contain the anger he feels as a result. 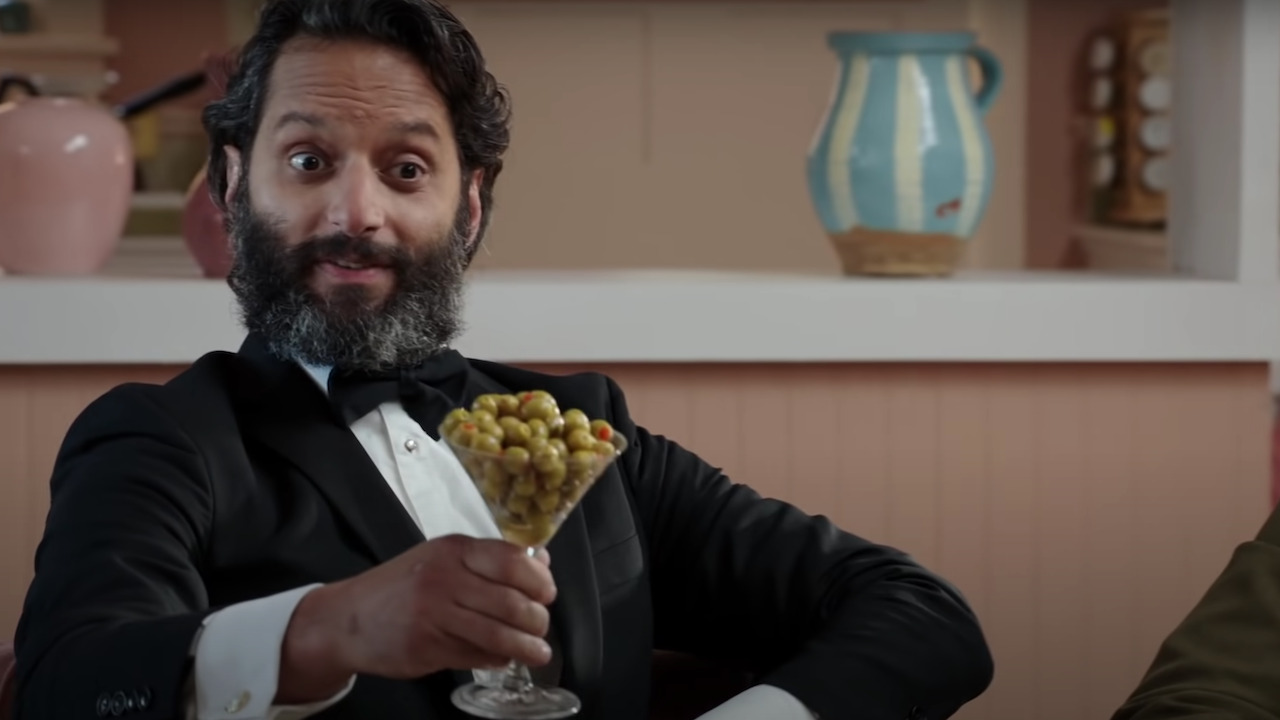 Jason Mantzoukas as Derek on The Good Place

Character bio: Dionysus is the god of wine and revelry, among others. He’s also the director of Camp Half-Blood, though not voluntarily. It’s punishment from his father Zeus, and Mr. D is by no means happy about it. Though he complains about his lot in life, Dionysus can show signs of reluctant affection for some of the campers in his charge.

Megan Mullally as Karen on Will & Grace

Character bio: Mrs. Dodds is Percy’s math teacher at Yancy Academy, but she’s really Alecto, one of the three Furies and a chief servant of Hades. She has particular disdain for Percy, so don’t expect these two to be best friends.

Character bio: Half man, half horse, Mr. Brunner (aka Chiron) poses as a teacher at Percy’s school before revealing his true form at Camp Half-Blood. He is there is train and guide demigods from all walks of life.

Character bio: There have been many stories about Medusa, but which ones are the closest to the truth? Percy, Annabeth, and Grover run into Auntie Em at her Garden Gnome Emporium, and they must fight for their lives.

Character bio: You know the Mother of Dragons, but have you heard the Mother of All Monsters? That’s Echidna, and when Percy runs into her and one of her most infamous children, he is faced with a pair of adversaries that may prove too strong for him.

Filmography: Haven, The Flash, The Vikings

Character bio: Ares, god of war and father to Clarisse La Rue. This is one guy you do not want to mess with, and isn’t it just like Percy Jackson to pick a fight with him?

Filmography: Hamilton, In the Heights, Mary Poppins Returns, Brooklyn Nine-Nine, His Dark Materials, One Day at a Time

Character bio: Hermes is the messenger god, as well as a trickster god. In fact, he’s the god of a lot of things. He also happens to be Luke’s father (not to be confused with that other Luke’s father). Hermes does not appear in The Lightning Thief, and so his role has been expanded in order to feature him in Percy Jackson and the Olympians season 1.

Listen to Prophecy Radio episode #57, “Junk Drawer God,” to hear us discuss Hermes’ roles in Greek mythology and the Percy Jackson universe, as well as how we think he could be introduced earlier in the show.

Character bio: Hades is the god of the Underworld, and father to a certain someone that we won’t be seeing for a couple of seasons. However, Hades has a large and pivotal role in The Lightning Thief, and therefore, Percy Jackson and the Olympians season 1. Whether he’s friend or foe has yet to be determined.

Timothy Omundson as Cain on Supernatural

Character bio: Hephaestus is the god of fire, which makes him the god of blacksmiths, metalworking, and a whole host of other vocations. This is another role that has been expanded for Percy Jackson and the Olympians, so it’ll be interesting to see at which point in the story he’ll enter. Though he’s a bit friendlier to demigods than Ares or Hades, he’s also an extremely solitary and reclusive person.

Want more ‘Percy Jackson and the Olympians’ cast and show discussions in your life?

Prophecy Radio is Subjectify Media’s very own Percy Jackson podcast, dedicated to all of Rick Riordan’s projects, new and old. That includes all of his books, the Percy Jackson and the Olympians TV show, the Kane Chronicles films headed to Netflix, and even the Rick Riordan Presents imprint.

Every week, hosts Karen and Kristen discuss the latest news, a major topic of choice, and the latest chapters in their Riordanverse reread. Now that we know the Disney+ Percy Jackson TV show has been greenlit, you can also look forward to their analysis of the series once it airs.